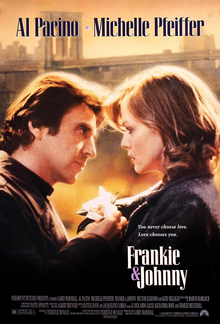 Members & guests–free via Amazon Prime and PlutoTV. To RSVP for the discussion, please scroll down. Registered attendees will receive an email the day before the discussion with a link to join via Zoom.

Watch the play adaptation anytime, then join the discussion! When Johnny (Al Pacino) is released from prison following a forgery charge, he quickly lands a job as a short-order cook at a New York diner. Following a brief fling with waitress Cora (Kate Nelligan), Frankie develops an attraction for Cora’s friend and fellow waitress Frankie (Michelle Pfeiffer).

Directed by Garry Marshall, the screenplay for Frankie and Johnny was adapted by Terrence McNally from his own off-Broadway play Frankie and Johnny in the Clair de Lune, which featured F. Murray Abraham and Kathy Bates. Enjoy viewing the 1991 film adaptation for free on Amazon Prime or PlutoTV, then join the discussion via Zoom on Sunday, May 16.